As an author who has only published one novel, I still qualify as an ‘Emerging’ writer, as opposed to an ‘Established’ one with many items of writing under their belts. This year’s Emerging Writers’ Festival (EWF) also incorporated the National Writers’ Conference (NWC), an event I’d never heard of before but was quite happy to go along to on my ‘Gold Ticket’ which paid for most EWF activities. At the EWF I spent a day listening to staff from Hachette (pr. Hashay) talking about what actually happens inside a publishing house, taking us from ‘The Pitch’ to actual publication and post publication marketing.

I had a fun night listening to various translators attempting to translate a very colloquially Australian piece from the Author Liam Pieper (who turned out to be a lovely self effacing chap who was somewhat bemused at being thrust into the limelight). Everyone who has ever done any serious translating or language study knows that a people’s thoughts are set by what can be expressed in their language. Spanish appeared to have little difficulty with Liam’s piece but the Indonesian and the Japanese both struggled with profanity.

Have also been to workshops on ‘Voice’, ‘Place’, and ‘Copywriting’.  I knew a little about the first two and nothing about the last, but I believe I got something useful out of all of them, which is what the festival is about. 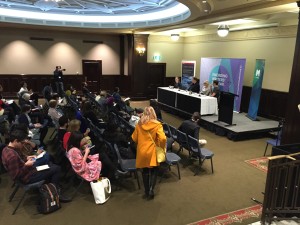 The NWC introduced me to a writer I knew nothing about, Sulari Gentill, among other people. I have now bought all her 1930’s detective series based around the black sheep of a grazier family – Rowland Sinclair. Have read the first and am now having difficulty forcing myself to do other things before picking up the second. The conference had panels on specialist writing such as reviewing (Just write what you think), blogging (Just write), TV shows (Just get out there and do it), Podcasting (missed that one), and writing in general (Just do it). Seeing a theme here?  Someone on the EWF panel ‘The Pitch’ actually came out and said it, ‘If you want to publish, you have to have something to publish.’ (It think it was the lady from Allen and Unwin, but can’t be sure.)

Other panels have been the early morning talks – I attended the one on ‘Queer Writing’. Panellists were Gay, Trans, and Lesbian, and all interesting and entertaining.

I also got to see half an hour of John Marsden, before racing upstairs for a workshop. Since he almost never makes public appearances now, this was a rare treat, and even for half an hour, well worth it.

The last day was dedicated to ‘women writers’, and brief attention was paid to ‘gamergate’ and its repercussions in the community. Clementine Ford said words along the line of “It’s not an insult to call you ‘fat’, if you don’t believe it, etc, but it is an insult if what is said causes you to cower in a corner and stop writing. You can engage or ignore those people, but you cannot let them have that sort of power over you.” She also mentioned a case where it spilled into real life and the perpetrator was arrested. She pointed out that Twitter were responsive in getting people banned, but Facebook’s complaints division was manned by non English speakers from mostly misogynist countries who didn’t understand what the complaints were about. i.e. You cannot rely on FB to help you. Take support from the huge positive feedbacks you get.